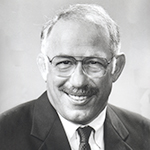 At the time of induction, Pontikes served as president of Comdisco, Inc., a company he formed in 1969 when the used computer market was virtually non-existent. Comdisco then became one of the world’s largest firms in its field. His $1 million endowment has made possible the Pontikes Center for Management of Information. || 1963 BS Marketing – SIU